Hey, I’m Emma and I have a blog over at www.sewdoitemma.com and I’m on instagram as @sewdoitemma.

Firstly, I want to thank Tammy aka D&H Fabrics Co for giving me this opportunity to speak as part of the “Sewing is for Everyone” initiative and for gifting me some wonderful fabric, which I will talk about later on in the post.

From my earliest memories I’ve always had something craft related going on. My Gran briefly had me into machine knitting with a mini version of her machine. Seamstress and a Tailor run in my mum’s Paternal and Maternal family tree, which is quite a humbling feeling. Any craft hobby that I’ve tried has been quite thearaputic for my well being, especially since I lost my Mum to cancer almost two years ago.  Losing someone that close, leaves a void that just can’t be filled.

In the last couple of years my dressmaking has accelerated after not really touching a sewing machine for most of my adult life.  I was spurred on by getting annoyed with the fit and the quality of material used in retail fashion stores, especially the plus sized ones, at least in the UK.  For example from season to season the fit would change, so I would find a fitting pair of trousers one season and the next season they no longer would, this was quite annoying.

My acceleration in dressmaking would not have been the same without the phenomenal group of ladies that make up @Sew_Scottish.  The foundations of this group were laid down at a meeting on a cold Sunday morning in November 2016, where after a brief conversation between myself and Lesley @sew_sleep_deprived, we both realised that we wanted to get a group of Scottish sewists together after seeing so many brilliant events being created South of the Border. Well, we managed to make it happen, and over the years we’ve organised a number of events and we’ve all gone on to become friends. It’s great to have a lovely group of people with which to talk all things sewing.

Below is a snapshot from my wardrobe which is all handmade and I’m quite surprised at how much I have sewn.  The RTW garments are slowly disappearing to new homes! 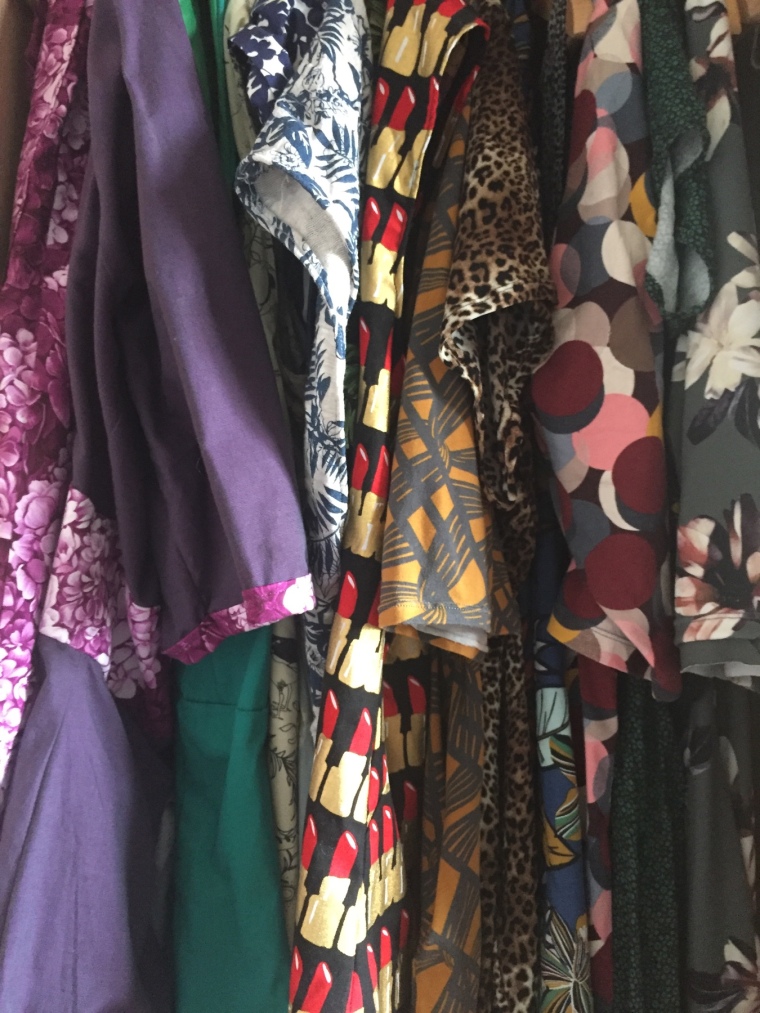 Sewing has helped me gain confidence with my body shape.  I’m about a 46′ bust and the same for the waist and then it just gets annoying with my hips being 57″ which means losing out on a lot of patterns both Indie and some of the Big 4 (but really 7, if you count them up!).  Usually my bust and hips fit most patterns but the hips do cause a bit of a problem when I like a long top.

In the last couple of months there has been a really important conversation about size inclusivity and how there is a feeling of being excluded from the indie patterns.  I’m glad things are now slowly changing and I’m happy to be a tester for any pattern designer who wants to make a positive change to their brand and to other sewists’ lives.

It hasn’t been easy though, this major topic was the starting point of so many different conversations, we all had to be mindful of keeping the main focus on the sizing issue and that voices were being heard.  There were so many excuses why bigger ranges of sizes weren’t being done but often they didn’t stack up as there are pattern companies like Cashmerette that have been able to cater to a broader range of sizes, which has helped them gain a massive following.

I know the feeling of being excluded all too well as I’m hard of hearing.  Yes, I wear hearing aids but often when I have a lot of background noise the main conversation that I’m trying to keep up with gets lost.  For example; take a busy bar add loud music and people trying to talk over it and then you see me with a dazed look on my face because my head is about to pop from the concentration that I’ve been giving trying to keep up with the groups’ chat. It all gets a little “under water” and “cloudy” for me after a while and hence that’s why I go quiet!  I am generally up front to everyone about my hard of hearing and most people are brilliant, once I say that I’ll try to read their lips if they are face to face in a noisy situation.

So that’s my story. Now without much further ado here is my make.  Using the “Summer Time Poppy’s” cotton with the Amy Nicoles’ Roski Top I made this.

In hindsight, (yah, it’s a great thing hindsight, isn’t it?) I should’ve used a Georgette or Challis for this pattern and not a woven as I feel it’s too stiff to allow the desired drape.  But that won’t stop me wearing it when we hopefully get some warm weather in Scotland! And yes I shall be making another in the required fabrics!